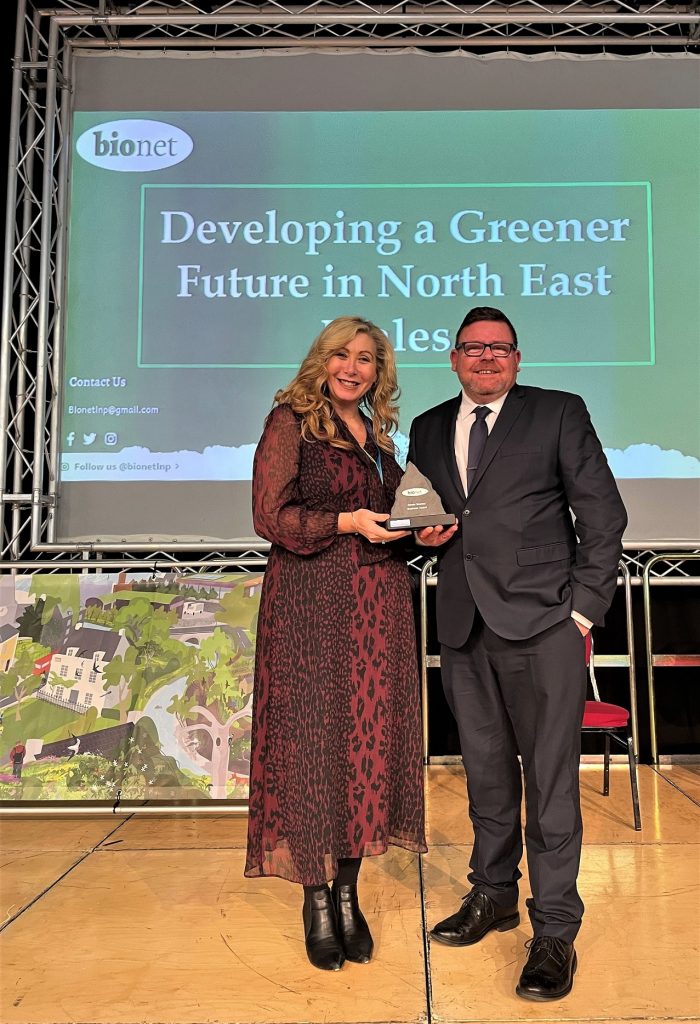 A FLOURISHING wildlife garden unveiled earlier this year has already won an award for conservation.

The new wildlife corridor and wellbeing garden at Coleg Cambria Deeside received a prize in the Business category at the inaugural Bionet Awards, held at Venue Cymru, Llandudno.

Bionet, the local nature partnership for north east Wales, praised the college for the creation of a biodiverse area featuring more than 2000 native bulbs, fruit trees, hedgerows, bird, bat and hedgerow boxes and a sanctuary where students, staff and the community can improve their health and wellbeing.

Classroom assistant Brian Valentine and a group of Jobs Growth Wales+ learners, staff and members of the Construction Trainee Academy began work on the 40 sq metre site 12 months ago as part of Keep Wales Tidy’s Local Places for Nature project.

He was thrilled for them to be recognised with this accolade and said: “To win this award less than 12 months after the garden and wildlife corridor opened is a huge honour for us.

“As it’s a living, breathing project it will continue to evolve and grow, but this gives us a platform to do even more in the years ahead.

“Other departments and the college as a whole will benefit from this initiative long-term as we have included development and maintenance of the site into our class schedule, working in partnership with stakeholders such as Keep Wales Tidy and local businesses.

“There are other elements to this, and in future we will be using the garden for wellbeing sessions – including exercise and mindfulness activities – so it will have even more of an impact.”

Samantha Moore, Cambria’s Curriculum Director for Jobs Growth Wales+ added: “Coleg Cambria prides itself on the principles of togetherness, sustainability, the environment and education so to be recognised for that is fantastic. I am so proud of all the hard work Brian and the whole Jobs Growth Wales+ team for receiving this award, it is so deserved.”

A spokesperson added: “Bionet believes it is important to celebrate successes achieved for biodiversity. In the face of the ecological emergency, a lot of the news we hear has a negative narrative but there are lots of people making a positive impact through local actions, including Brian and the team at Coleg Cambria.

“They were fully deserving of the award, and we wish them well with the project going forward.”