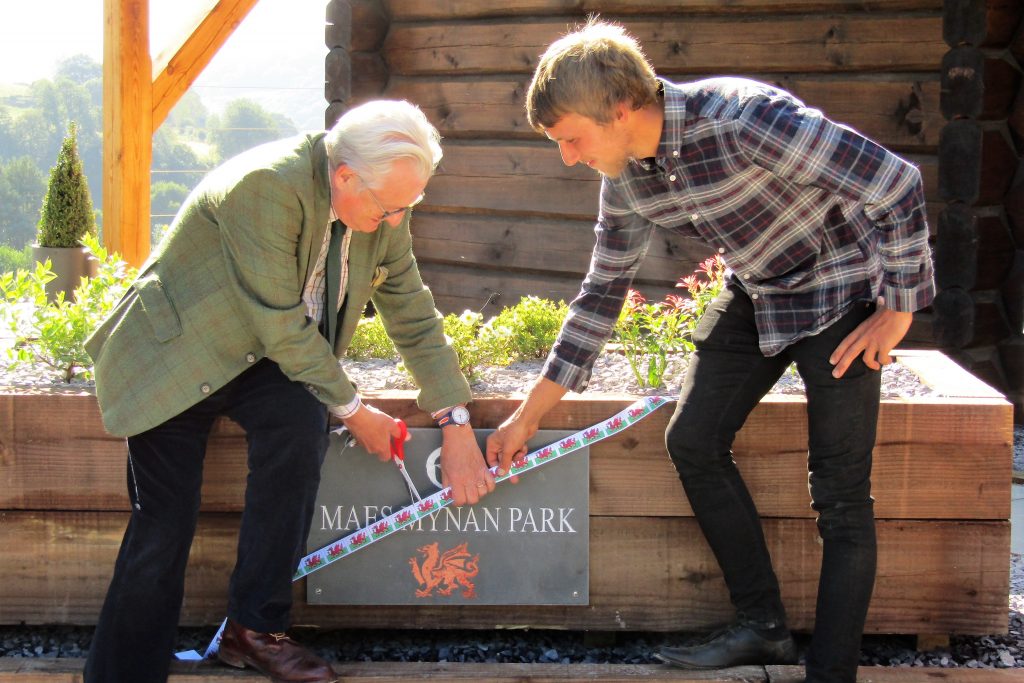 THE first phase of a new luxury North Wales holiday park has been launched.

The site will feature 47 lodges around two lakes as part of phase one, with a further 63 static caravans and 70 touring caravan pitches becoming available over the following three years.

In addition, a further area has been set aside for boutique ‘eco-glamping’.

Peter thanked Lord Elis-Thomas for joining the celebrations and officially launching the Park.

“It was an honour to have him here with us today,” he said.

“We have worked so hard over the past few years to lay down the infrastructure and foundations for Maes Mynan Park; it’s been a real labour of love for Louise and myself.

“Our first show lodge, The Llewellyn, is now in place and we have had a lot of interest from across the country.

“It’s an amazing part of the world and very close to our hearts, so to be opening a new luxury holiday park to share with others is a dream come true.”

Acorn Leisure – which also owns sites in nearby Cilcain and Lloc – rejected the advances of national food and drinks chains keen to have a presence at the former quarry, in favour of collaboration with independent and artisan businesses in the locality.

“Supporting smaller producers and shops in Caerwys and the surrounding area will help boost the economy in Flintshire and give holiday homeowners at Maes Mynan a flavour of how incredible this region is,” said Louise.

“The scenery is beautiful, there is plenty to do and it’s very accessible, so there are so many reasons to visit, stay and own a holiday home in this region of North Wales.”

She added: “It was fantastic to have the opportunity to discuss the history of this location and our plans with Lord Elis-Thomas, especially as Maes Mynan was a llys (court) to the last medieval Princes of Wales.”

Before touring the site, Lord Elis-Thomas cut the ribbon on a Welsh slate plaque carved by Thomas Lewis, whose family have lived in the town for generations. Food was provided by The Piccadilly Inn.

Maes Mynan is situated within an Area of Outstanding Natural Beauty (AONB) and features a woodland, three lakes and added landscaping to protect biodiversity and connectivity within the natural landscape.

“I’m delighted to open this exciting new development for north east Wales, and would like to congratulate Louise, Peter and their team for the investment in the area’s visitor economy,” said the Deputy Minister.

“Their commitment to working with local businesses which will further benefit the local economy, is also to be applauded, and it’s been fascinating to learn more about the history of this interesting site. I wish the team every success for the future.”