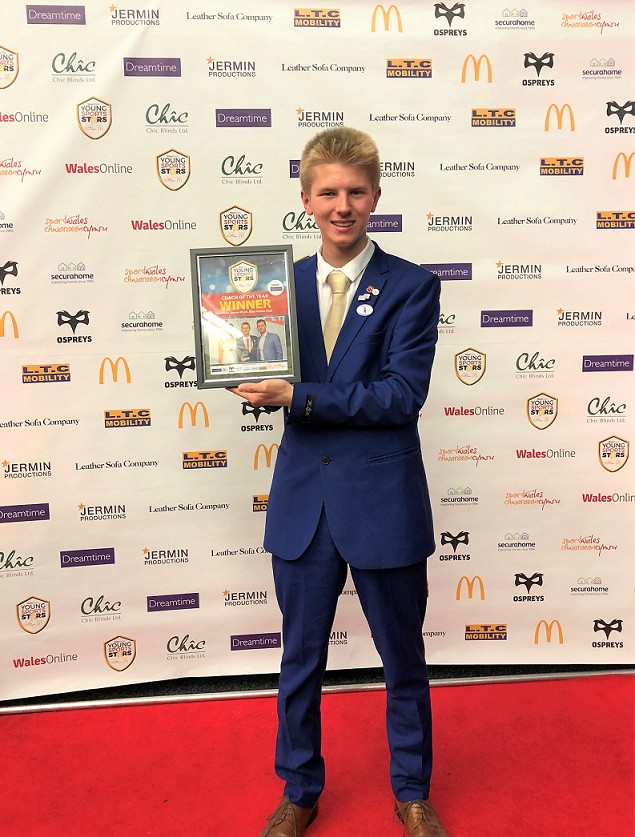 A COLEG CAMBRIA student is serving up success in politics and tennis.

Jonathon Dawes, a member of the Welsh Youth Parliament for the Vale of Clwyd and a learner at Deeside Sixth Form Centre, was named Denbighshire Sports Coach of the Year in 2019.

The former Rhyl High School pupil, who lives in the town and is head coach of the local tennis club, has had an incredibly busy few months.

He is also a British Tennis and Tennis Wales Award winner and British Citizens Youth Award recipient, as well as Head of Ambassadors at My Tennis Events, founded by The Apprentice star, Sabrina Stocker.

Currently taking A Levels in Government and Politics, Economics and PE, Jonathon was “over the moon” to win the coaching prize and thanked everyone at D6 for their support.

“The lecturers and staff at Cambria have been tremendous, I am very thankful,” said Jonathan, who also won the Coach of the Year Award at the Welsh Sports Awards ceremony in Cardiff.

“It was a massive honour to win and I am so grateful to the selection panel for giving me this opportunity and recognising my coaching at a local and national level.

“I have been working very hard from a young age with the sole aims of increasing participation through suitable provision, making tennis accessible as possible and helping to create a nation of champions.”

Jonathon completed his Level 2 Coaching qualifications and was lauded by the community for setting up inclusive sessions for wheelchair users at Rhyl Tennis Club.

Among his greatest achievements was running a Tennis Skills week at Rhyl High School, which gave more than 1,000 children the opportunity to play the sport.