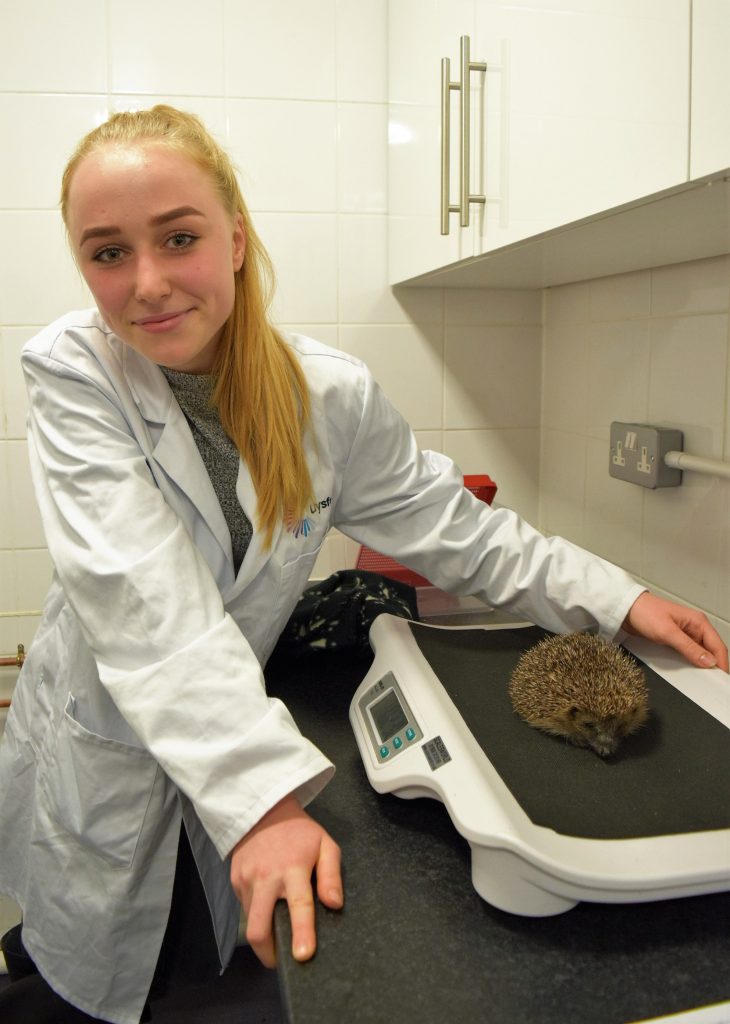 COLEG Cambria and a North Wales wildlife charity are working hard to reverse an alarming decline in the region’s hedgehog population.

The Animal Care team at the college’s Llysfasi site have teamed-up with Hedgehog Help Prestatyn (HHP) to try and save the popular prickly creatures.

They have converted a room into a facility that can hold eight hedgehogs at any time, providing warmth, shelter and regular meals.

Instructor Kath Roberts says Level 3 Animal Management students have been monitoring and feeding the animals, weighing and assessing them before they can be released back into the wild.

Since the project began in August, up to 20 hedgehogs have been looked after at the centre, which will be open all-year round.

“Hedgehog Help Prestatyn bring them to us to be fattened up, treated, cleaned and looked after,” said Kath.

“It’s rewarding for the learners and Coleg Cambria Llysfasi to play a small part in trying to rehabilitate and help increase their chances of survival, as numbers continue to dwindle, especially at this time of year when temperatures begin to drop.

“They are kept in a quiet, warm part of the building in individual carriers while we monitor their progress and build them back up to the right weight, so they can be returned to their natural habitat.

“It’s good to be able to help, and great experience for the learners in working with British wild animals.”

Recent figures revealed hedgehog numbers have fallen by up to 50% in the last 20 years, notably in rural areas. The statistics suggest the creatures are disappearing more rapidly in the countryside, as hedgerows and field margins are lost to intensive farming.

Tracy Pierce, founder of HHP, thanked the college for their support, and said: “We’ve had our busiest year since we began in 2016, with more than 60 hedgehogs in care at any one time.

“We could not have managed without foster carers and our new link with Llysfasi. We work closely together, with daily weight reports and microscopy, to monitor the health of the hedgehogs.

“Hedgehogs are declining rapidly so it’s fantastic that they are now part of the Small Animal Care course.

“The partnership will continue to develop, and I thank them again for their support.”