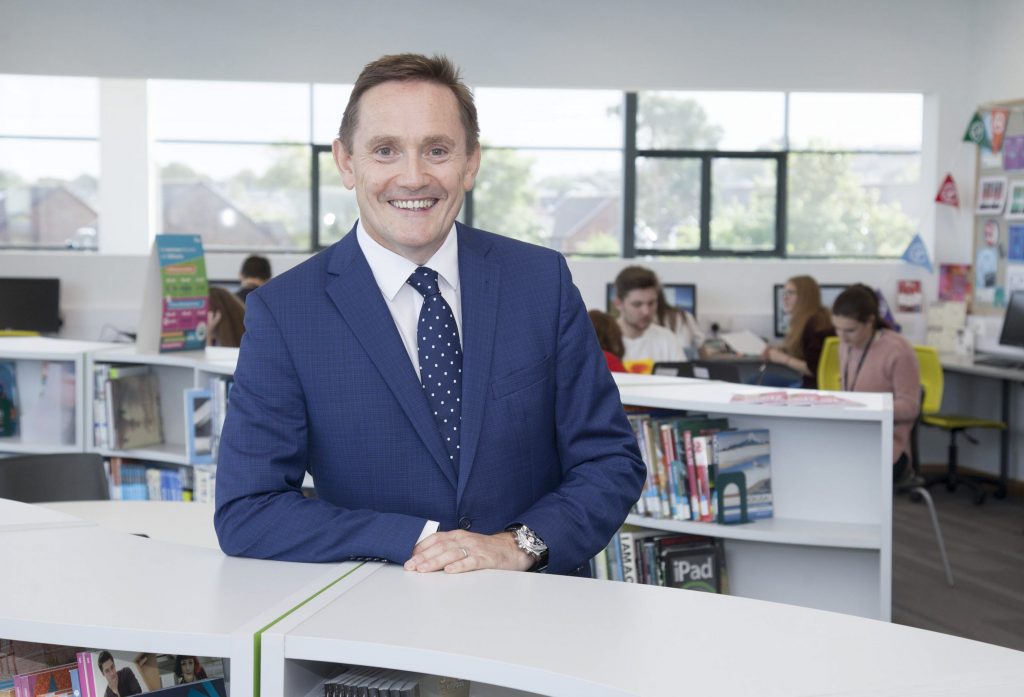 THE enduring and positive impact of David Jones on education and the economy has received widespread praise from leading figures across the country.

Mr Jones steps down as Chief Executive of Coleg Cambria this week after steering the institution to national acclaim.

The 57-year-old was formerly principal of Deeside College before its merger with Wrexham’s Yale College – and later Llysfasi and Northop – in 2013.

A champion of work-based learning, apprenticeships, fundraising and accessible education for people of all ages, Mr Jones has made a vast contribution to shaping the careers of tens of thousands of youngsters and mature learners over more than two decades.

Admitting he leaves with a “heavy heart” but “incredibly proud” of how far the college has come, he said: “It’s a strange feeling leaving after 20 years but the time is right for me to move ahead in my life and take on new challenges.

“When I arrived in 1999 I didn’t know the area but was immediately made to feel welcome; the people here in north east Wales are so passionate and positive, they have a unique attitude and I have tried to tap into that, making many friends along the way.

“I’m of course going to miss everybody but am moving onto new things. I’m not retiring I’m full of energy and ideas and it’s time to channel that into new ventures.”

Mr Jones added: “We’ve achieved so much and put education in this region on the map. As a result, Coleg Cambria is known across the UK, which is amazing as it didn’t even exist in 2012.”

The dad-of-four will be as busy as ever, taking over the chairmanship of Qualifications Wales, launching a new consultancy business and as non-executive director of DECA (Defence Electronics and Components Agency) in Deeside.

“I’m particularly looking forward to my role with DECA as it gets me back into electronics, which is where my career started,” he said.

“I’ll also be continuing my charity work for NSPCC Cymru as part of their Appeals Board and have many other projects up my sleeve, so there’s no danger of me slowing down.

“I love reading, walking and gardening but I’m not ready to put my feet up just yet!”

Leaders from across Wales paid tribute to Mr Jones, including Lord Barry Jones, who celebrates 50 years in Westminster next year.

He said: “David has made huge contribution to the economic resurgence of north east Wales. He has delivered apprenticeships galore and built up Coleg Cambria into one of the best FE institutions in England and Wales. Cambria has become an instrument for good and David deserves a great send off and a big thank you.”

David Jones, Clwyd West MP and former Secretary of State for Wales: “David is an outstanding educationalist who has led Coleg Cambria with outstanding success. His contribution to further education in North Wales has been transformational. Our region owes him an enormous debt of gratitude.”

John Clutton, Chair of the Governing Body at Coleg Cambria: “We would like to thank David for the leadership, friendship and vision he has shown as Principal and now Chief Executive of Cambria. His legacy will be the outstanding success that students of the college have achieved locally, nationally and internationally during his tenure. In addition, the support and opportunities provided to local businesses and organisations have been equally impressive. His influence and achievements are immeasurable, and he will be sorely missed by us all.”

NSPCC Cymru board member Hywel Peterson: “I’ve had the great privilege to work with David on both the Sam Warburton testimonial and NSPCC Cymru. David is a real pleasure to work with, his leadership is outstanding, and he can be proud of his legacy as he has achieved much, especially for the local communities and charities in North Wales.”

Alwen Williams, former Director of BT Cymru and new Programme Director for North Wales Economic Ambition Board and the North Wales Growth Deal: “The Coleg Cambria we know today is reflective of David’s vision, drive and tenacity over the last two decades, to push the boundaries for further education in North East Wales. The success achieved by learners is testament to his work and a legacy like no other. I have no doubt that his influence and impact as a leader in Wales will be in high demand and wish him well in his next challenge.”

Minister for Economy and North Wales, Ken Skates AM: “David’s influence on education, industry and North Wales as a whole, cannot be underestimated.  He has successfully led the mergers that resulted in the creation of Coleg Cambria and leaves the college in a strong position, as work continues on the £21m redevelopment of the Yale site in Wrexham. Coleg Cambria is a leading tertiary college that as a result of David’s leadership and vision has established strong and constructive relationships with all partners including government and businesses. David has also played a key role as Chair of the Deeside Enterprise Zone and with developments such as the excellent AMRC Cymru in Broughton. I would like to thank him for what he has achieved. I’m certain he will continue to champion North Wales as he embarks on new challenges for the future, and I wish him all the best.”

Steve Thomas, Airbus Government Affairs Executive: “Under David’s leadership a best in class college has been created where the learner is placed first in every decision made. Thousands of Airbus apprentices have benefitted from the education and skills development undertaken at the college, and Cambria is rightly recognised as one of the best FE institutions in the UK. David’s drive, passion, enthusiasm and leadership style have been a major factor in achieving this status.”

Councillor Mark Pritchard, Leader of Wrexham County Council: “Coleg Cambria plays a huge part in the life of Wrexham, and David has been instrumental in its tremendous success over the years. Wrexham has a college it can be proud of and David has worked tirelessly with education professionals, students, businesses and communities to create a learning environment that is helping to provide the foundations for success in north east Wales. He’s done a tremendous job and we wish him well for the future.”

Among Mr Jones’ most momentous achievements are winning the TES Leader of the Year Award in 2017, laying the foundations for a strong Worldskills legacy and helping the college raise more than £115,000 for NSPCC Cymru in an incredible year in which he and wife Julia walked 48 miles across three counties in just 14 hours.

A native of Ciliau Aeron in Ceredigion, the former chair of both North Wales CBI and Deeside Enterprise Zone will be succeeded by Yanina Williams, currently CEO of Hugh Baird College Liverpool.

Mr Jones received an OBE from the Prince of Wales in 2015 for services to further education in north east Wales and has led Cambria to a position of financial strength, employing up to 1,000 people and pumping more than £400m into the local economy.

He has also instilled a commitment to diversity, health and wellbeing, and unveiled more than £60m of new facilities in five years, but his proudest moment of all came in 2007.

“I had been working at the college for a few years and for three years as Principal and Chief Executive and felt that we had not capitalised on our full potential,” he said.

“We started to look at the culture of the college – it was Deeside at that point – and began to unite everyone, get them pushing in the same direction, and a lot of time was spent working together with the same vision.

“By the end of 2007 we had two Estyn inspections, one for our main FE provision and one for apprenticeships, and we got what was then the best possible grades you could achieve for both, which had never been done in the UK before.

“That was the starting point and built the momentum for what was to follow, a workforce filled with confidence and togetherness – that same ethos and attitude has carried through to Coleg Cambria.

“We have the most brilliant team here; I can’t praise them enough.”

Mr Jones added: “I wish Yanina every success for the future, I know she will do an incredible job.

“From a distance I look forward to watching the continued growth of Coleg Cambria and am sure it will remain at the top where it belongs.

“This is an amazing college, there are fantastic opportunities ahead and I would like to thank every member of staff, every student, governor and partner organisation I’ve worked with over the last 20 years for your love and support – I will miss you all.”